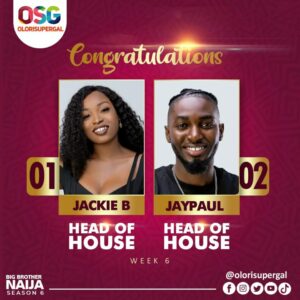 The Big Brother Naija season 6 reality TV show, comes with another twist in week six as two housemates a male and a female have been named as the Heads of the house.

JayPaul and JackieB emerged as the heads of the house after they won a tedious game. They are both immune to eviction this week.

Recall that Liquorose, was head of house in week five and did not have access to the head of the house room because she was prohibited in week three.