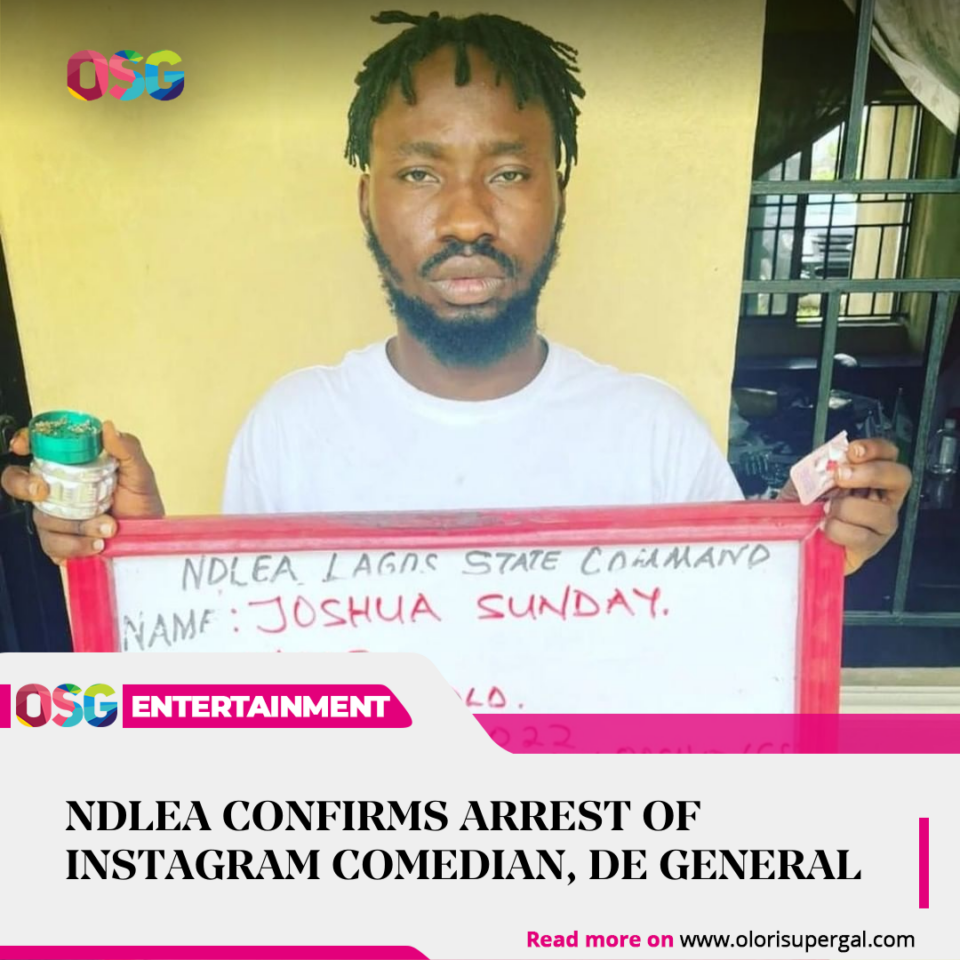 Olorisupergal Media previously reported that Degeneral was arrested on Wednesday, 12th January after officials stormed and searched his residence.

Degeneral, during his Instagram live tried resisting arrest but was later whisked away to an NDLEA office in Festac, Lagos State.

A spokesman of NDLEA, Femi Babafemi confirmed the arrest of Degeneral. He revealed that drugs were found in his house.

“He was arrested because drugs were found in his house. A statement will be issued on the matter later.”

The video released by DeGeneral reportedly saw five men wearing the NDLEA apparel in his home. They eventually restrained the comedian who refused to stop making a video record of the presence of the officers.

One of the officers in the video reportedly smashed the phone while another was talking to him. The skit maker struggled with the officers while they were trying to arrest him.

“I don’t have the right to make a video or what are you guys saying? Let the world know what is happening here.” De General responded to a lady NDLEA officer who seemed to have led the team.

Meanwhile, a graphic designer and content creator, Amodu Ayodeji Peter, known as Ayo the creator, was at the skit maker’s house at the time of the incident.

Ayo the creator also wrote his version of the event on his Instagram page. He implied that the drug enforcement agency manhandled them on a false suspicion from an unknown source.

He wrote, “NDLEA Nigeria you know who the real drug barons are in this Lagos, but yet you come into De General’s house, assault him, arrest him! Have you seen him promote this kind of content? De General doesn’t do drugs, and whoever is responsible for this, God is watching you.

“I haven’t slept since 2 am. They wouldn’t let us (sleep) in the station. Please help us noble Nigerians. He is in the NDLEA office in Ikoyi.”

Hours later, a statement was released on NDLEA’s official Instagram page along with the mugshot of the comedian and three others who were arrested.

Babafemi said the narcotics officers who acted on credible intelligence, stormed a drug joint at Orchid Estate, Lekki area of Lagos state, where three suspects were arrested with illicit drugs including 200 sachets of 225mg Tramadol and 1.5kilograms of cannabis sativa.

It was also alleged that during the operation, some persons including the suspected dealer ran away with bags suspected to contain exhibits. A trail allegedly showed they ran into the residence of the comedian.

The agency further claimed that the “video trending on social media was the moment the suspect and his friends decided to disrupt the bid to conduct a search of the house.” It was also alleged that he admitted to ownership of drugs recovered from his house.

Singer Timi Dakolo Shares What Pain Can Make One Do

Singer Timi Dakolo Shares What Pain Can Make One Do