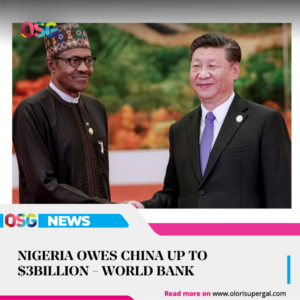 Similarly, in terms of external sources of funds, loans from China accounted for 11.28 percent of the External Debt Stock of USD27.67 billion as at the same date.

According to a document from World Bank, the total borrowing from China of USD3.121 billion as at March 31, 2020, are concessional loans with interest rates of 2.50 percent per annum with a  tenor of 20 years and a grace period (moratorium) of seven years.

The document said “These terms are compliant with the provisions of Section 41 (1a) of the Fiscal Responsibility Act, 2007. In addition, the low-interest rate reduces the interest cost to the government while the long tenor enables the repayment of the principal sum of the loans over many years. These two benefits, make the provisions for debt service in the annual budget lower than they would otherwise have been if the loans were on commercial terms.

The document further explained that “The impact of these loans is not only evident but visible. For instance, the Idu – Kaduna Rail Line has become a major source of transportation between Abuja and Kaduna. Also, the new International Airport in Abuja, has improved air transportation for the populace, while the Lagos – Ibadan Rail line when completed, will ease traffic on the busy Lagos -Ibadan Expressway.

“The projects also have the added benefits of job creation, not only by themselves but through direct and indirect service providers, a number of which are Small and Medium Enterprises”.

Although these loans are project-tied, Nigerians still rejected a request by President Muhammadu Buhari for a  fresh loan, prompting the Minister of Finance Budget and National Planning, Zainab Ahmed to assure the nation that the country’s debt is still sustainable.

She said, “Nigeria’s debt is still very much within sustainable limits. “We need to roll out infrastructure now, and grow the economy now— not later”.