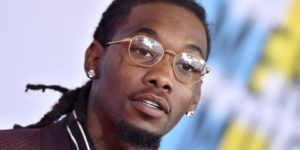 Rapper Offset, a member of the hip hop trio Migos, was detained by police in Beverly Hills, California, while streaming the encounter on Instagram Live.

Authorities pulled over Offset, born Kiari Kendrell Cephus, after receiving “information from a passerby of a subject who pointed a weapon from a vehicle at him,” the Beverly Hills Police Department said in a statement.

Offset was driving with Marcelo Almanzar, who police arrested at the scene on charges of carrying a concealed weapon and carrying a loaded firearm in public. Beverly Hills police said the victim of the alleged crime did not want to press charges against Almanzar, 20, whose bail was set for $35,000.

The police stop was streamed on Offset’s Instagram Live, watched by tens of thousands of people. On the stream, Offset said he didn’t want to take his hands off the wheel when officers asked him to turn off his car because the police had guns.

“We were told you guys were waving guns at people,” one police officer can be heard saying. As officers begin to try to open the door of Offset’s car, he protests, saying their actions are illegal.

Chioma Inks Her Son’s Name On Her Arm

Chioma Inks Her Son’s Name On Her Arm