Award winning director, Ava Duvaray has added another first to her name.  Her directed movie, A Wrinkle in time has become the first film directed by a black woman to gross $100 million at the domestic box office.

A Wrinkle in Time is an American 3D science fantasy film based on the novel of the same name by Madeleine L’Engle, and stars Oprah Winfrey, and Reese Wintherspoon. The movie chronicles a young girl who, with the help of some travellers goes on a quest to find her father who went missing after discovering a new planet. The movie, which had a production and Marketing budget of $150 million and $250 million respectively, was also the first movie with such high budget to be directed by an African American Woman.

Ava Duvarey, born in August 1972, was also the first African American to win the Best Directing award at the Sundane Film Festivel in 2002 for Selma. She was also the first Black Woman to to be nominated for Best Picture at the Academy Awards, also for the same movie.

The award winning director took to twitter to acknowledge the historic achievement, tweeting, “Lovely room to be in. But can’t wait for more sisters to be here too.” 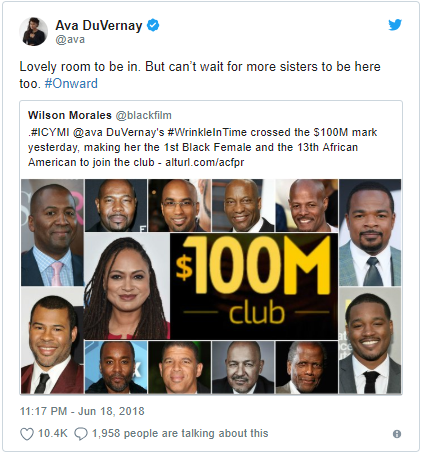 Angela Robinson was the First black female director to gross $100 million in total box office. She hit it with her 2005 movie, Fully loaded