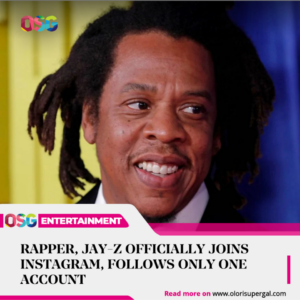 The 51-year-old American rapper and media proprietor launched his own account on the social media platform on Tuesday, 2nd November 2021.

So far, his account has 1.4 million followers, and his wife, Beyonce is the only person he follows back.

For his first post and Instagram Story, the star shared a countdown and poster for the release of the new Netflix movie ‘The Harder They Fall’ which he produced for Netflix.

The film’s soundtrack includes two collaborations between JAY-Z and Kid Cudi as well as Conway The Machine and Jadakiss.