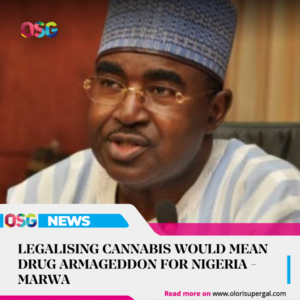 The Chairman, National Drug Law Enforcement Agency, Brig. Gen. Mohammed Marwa (retd.), has said the call for the legalisation of cannabis sativa cannot succeed in Nigeria because the proliferation of illicit drugs often leads to crime, chaos, and conflict.

Marwa asked those calling on Nigeria to legalise cannabis and join the league of countries taking economic advantage of the substance if they would be happy to see their teenage children having free access to the substance in the name of national economy.

He said “Our individual answer to that question will give us a public opinion of where we should stand as a country in the cannabis debate. We should stop treating cannabis like some sweet candy without any side effects. Its repercussions outweigh the vaunted benefits. And legalising its cultivation for a country like Nigeria is a shortcut to illicit drug Armageddon”.

He further said that Nigeria could not afford to join countries legalising cannabis because Nigeria’s regulatory capacity was not sophisticated.

Marwa stated these while featuring as a guest speaker during the 2021 Ulefunta Annual Public Lecture organised by the Deji of Akure, Oba Aladetoyinbo Ogunlade Aladelusi.

According to a statement on Friday by NDLEA spokesperson, Femi Babafemi, Marwa was represented at the event by his Special Adviser on National Drug Control Master Plan, Otunba Lanre Ipinmisho, at the event, which was chaired by a former Secretary to the Government of the Federation, Chief Olu Falae.

The statement quoted Marwa as arguing that legalising cannabis would not augur well for Nigeria, judging from experiences in other climes.

He said, “Africa, nay, Nigeria has enough problems without adding the burden of narco-terrorism. Of all the known illicit substances, cannabis sativa is the only one that is native to Nigeria and it is the most abused of all illicit drugs, and from the findings of the National drug Survey of 2018, cannabis is becoming a national albatross.”

While warning that the number of Nigerians hooked on cannabis alone was more than the population of countries like Portugal, Greece, or the Republic of Benin, Marwa said Nigeria could not afford to toy with the grim reality of the danger of legalising cannabis when all the needed infrastructure to monitor and control that was still far from being in place.

He added, “Where cannabis is concerned, we should not by any argument allow ourselves to become the proverbial fool that rushed in where angels fear to tread. Countries like Canada, which are pro-cannabis, have strong and efficient institutions that are way ahead of ours.

“And for those who point at the inherent economic benefit that could accrue from legalisation of cultivation, in accordance with our reality, would you be comfortable, if, by tomorrow, your 13-year-old son could easily access marijuana, or you find some wraps of weed in his pocket, or you learnt someone had introduced your 16-year-old daughter to smoking igbo under the pretext that it has medicinal value?”