Kunle Afolayan- I’m Not Religious But I Believe In God

Kunle Afolayan- I’m Not Religious But I Believe In God 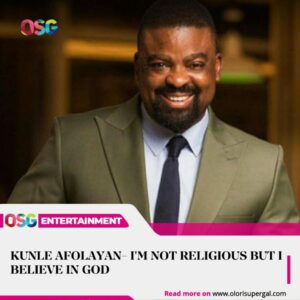 Nigerian actor, film producer, and director, Kunle Afolayan, has stated that he’s not religious but believes in God.

He disclosed this in a recent interview with HipTV, where he mentioned that he neither goes to church nor mosque. He said “The thing is that I don’t go to church; I don’t go to the mosque. I don’t go anywhere.

“I’m not religious but I believe in God. I tie most of the things I do to God. I have a personal relationship with God.”

He added that he has worked towards having a personal relationship with God without intermediaries.

He said, “All you need to do is discover what works for you. What works for me is not to have an intermediary between me and God.

“I’ve been blessed enough to have a one-on-one relationship. It has worked so far and that is why I tie everything to God. Most things I do now, I’ve seen them coming. It was just for me to work towards it”.

The award-winning producer celebrated his birthday with a new movie and the opening of his new hub, Kap Hub on 30th September 2021.

While the hub was inaugurated on the same day, his movie, Swallow, was released on Netflix on Friday 1st October 2021.