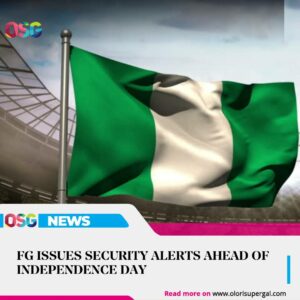 The Federal Government has alerted the general public to heightened security activities preparatory to the events marking the country’s 61st Independence anniversary.

The alert was contained in a statement issued in Abuja by the Minister of Information and Culture, Alhaji Lai Mohammed on Friday, 24th September 2021.

Mohammed, however, urged residents of the Federal Capital Territory and its environs not “to panic and to go about their businesses”

Meanwhile, activities marking the nation’s 61st Independence will start on Sunday with a special interdenominational service to be held at the National Christian Centre, Abuja.

This was disclosed at a press conference in Abuja on Friday.

The Permanent Secretary, Ministry of Information and Culture, Dr. Ifeoma Anyanwutaku, who represented the minister, said a special award ceremony would be held on September 30 at the Presidential Villa, Abuja, while the anniversary parade would hold on October 1 at the Eagles Square.

The other anniversary: A historian’s perspective
Anyanwutaku said the activities would end with a special Jumat service at the National Mosque in Abuja on the same day.

She described the independence activities as an opportunity to appreciate the efforts of heroes who fought for independence.

Buhari – Over Four Million Households in ...