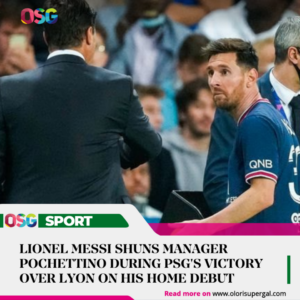 Lionel Messi appeared angry with Mauricio Pochettino after the manager removed him during Paris Saint Germain’s 2-1 win over Lyon at Parc Des Princes over the weekend.

The 34-year-old was handed his first start since his sensational move to the French League outfit during the summer transfer window on a two-year deal as a free agent.

The six-time Ballon d’Or winner led his side’s attack alongside Kylian Mbappe and Neymar but the trio once again failed to impress as Messi continues to search for his first PSG goal.

With 15 minutes left on the clock and PSG chasing a winner, Pochettino cut short Messi’s home debut by withdrawing him and replacing the Argentine with Mauro Icardi. The tactical change went on to pay off as Icardi came off the bench to grab the winner as the tie ended 2-1 in favour of PSG.

However, Messi was upset with Pochettino’s decision to substitute him and even snubbed the manager’s offer of a handshake as he gave him an angry face. Despite the fanfare that surrounded his arrival in the French capital, Messi has struggled to settle down with things not going according to plan on the pitch.

The six-time Ballon d’Or winner remains goalless in three of his appearances for PSG thus far and failed to help them secure victory over a stubborn Club Brugge side during the Champions League.