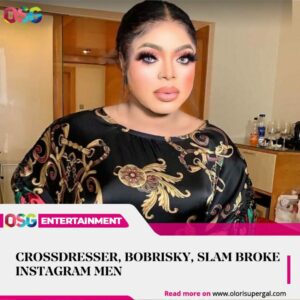 Controversial Nigerian crossdresser, Idris Okuneye, better known as Bobrisky, has disclosed that he will always choose money over true love.

In a post on his Instagram page, the 30-year-old male barbie slammed admirers who slide into his DM but never ask for his account number. He noted that any relationship that doesn’t involve money should not be considered.

He also said it is only a mad person who would suggest a woman who has hustled throughout her life to settle for a poor or average man because of true love.

“Imagine telling your sister hustling day and night at 25yrs to 30yrs to look for a poor man/average man to settle down with just because she is looking for real love….. so I will waste my 25yrs to 30 yrs of hustling as a single girl to be with a poor man just because of true love? You are mad.

“All dis broke guys on Instagram is time you all button-up ur shoes to make real money, is not by sliding into a girl dm saying hi beautiful. Oga tells her to drop her account”.