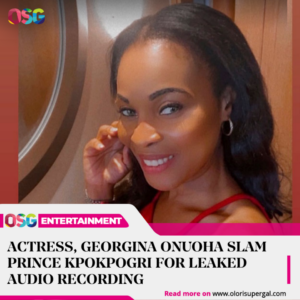 This comes after an audio recording between Tonto and Kpokpogri made rounds on the internet on Tuesday. In the recording, Tonto was heard begging her ex-boyfriend not to leave her, after he accused her of cheating.

She called him a pig and noted that he is not worthy to be a man.

Read her caption below;

“If tomorrow they call on all men you this thing, will count your two left legs and come to answer “present”?

“Kpokpogri, you are not a human being, let alone worthy of being called a man.

You are vile, mean and despicable to record a woman in her most vulnerable state without her consent then share it on social media to make caricature of her and her pain.

“One thing I appreciate about life is karma. It will find you, and it will teach you hard lessons of life.

You may have won this battle with this woman, someday you will lose a greater war, and just as you try to shame, the world will go agog celebrating your shame and downfall.

“You are no man; you are a coward.

In any civilized world, you will be sued for invading her privacy. You are truly despicable.

“Women stay away from this animal. Tomorrow you might be having an intimate time with him and you will find yourself on social media.

“Men if you are doing business with this animal be weary, he will blackmail you and betray you. He has shown the world that he lacks character and integrity to subject his lover to such agony.

“I am not a fan of the woman you did this to, but she has proven herself to be a better human being than you. And I’m sure, every respectable man and woman will give her a hug because you did her dirty. You are a pig”.