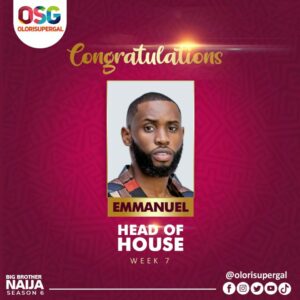 Emmanuel has emerged the head of house for week seven, in the Big Brother Naija season 6 reality TV show.

He was named the head of house after he won the game. He picked Liquorose as his deputy for the week.

Contrary to what is expected, this week’s deputy is up for eviction. This comes after the housemate who came second in the head of house game used the veto power to save himself after he was put for eviction.

BBNaija Season 6: Seven Housemates Up For ...