Kizz Daniel Reveals The Effects Of Fatherhood On Him

Kizz Daniel Reveals The Effects Of Fatherhood On Him 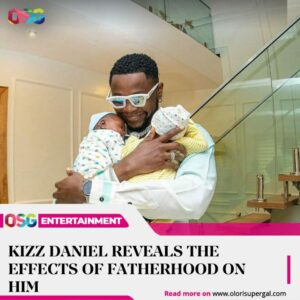 Nigerian singer Oluwatobiloba Daniel Anidugbe, better known as Kizz Daniel, has revealed the effects of fatherhood on him.

In a short video shared on his Instagram page, the 27-year-old father said firstly, fatherhood has made him more responsible, and secondly, it has made him more boring because he can’t use some words in the house anymore.

He noted that he can’t use the words fck and sht in the house because he receives a severe warning from the mother of his kids, not to corrupt their minds at a very tender age.

Kizz Daniel went on to say ‘fatherhood is good, you become more experienced and automatically become a better person because obviously, you want to be a very good role model to your kids even at baby age”.

He posted the video after some of his fans asked him how fatherhood has changed him as an artist.

Recall that the singer welcomed his children Jelani and Jalil on his 27th birthday, Saturday, May 1st, 2021.