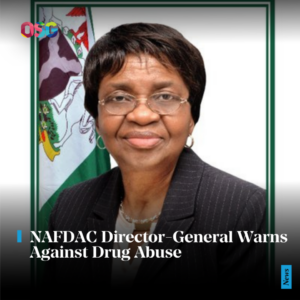 The Director-General of the National Agency for Food and Drug Administration and Control, Professor Mojisola Adeyeye, has warned that youths who grow up in stressful circumstances may acquire psychological disorders and may become dangerous adults.

She noted that conditions related to COVID-19 are known to have increased economic deprivation and feelings of social isolation, which are factors that can contribute to increased drug use.

Prof Adeyeye made this known while speaking at the maiden National Security Summit in Abuja on Sunday, with the theme ‘COVID-19, drug abuse, mental health: Implications to national security.’

She was represented by NAFDAC’s Director of Narcotics and Controlled Substances, Musa Umar.

In a statement titled: ‘Drug abuse poses a real threat to mental health and national security’, the Director-General stated that any society seeking to achieve adequate military security against the backdrop of acute food shortages, population explosion, low productivity and per capita income, high rate of illiteracy, and a fragile infrastructure/technical infrastructure will fail.

“Today, security encompasses all the interconnected domains of economic self-reliance, social cohesiveness, and political stability, in addition to the physical safety and survival of a state from internal or foreign threats.

“It touches on how people might live long and healthy lives”.

She further noted that human growth has always been linked to the protection of lives and property, which is why people who framed our constitution deemed security the most important responsibility the government has to its inhabitants.

According to her, the 2030 Agenda for Sustainable Development clearly stated that there can be no sustainable development without peace.

Although drug abuse is not specifically mentioned in the Goals and Targets, she pointed out that it overlaps with aim 3.5 – Strengthen the prevention and treatment of substance misuse, particularly narcotic drug addiction and hazardous alcohol use.

She added that “The goal is good health and well-being”.