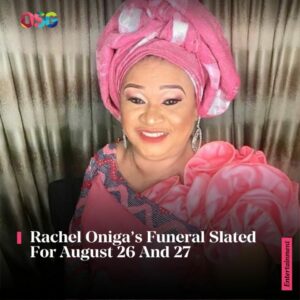 The funeral of late Nollywood veteran actress, Rachel Oniga has been scheduled to take place on 26th and 27th August, in Lagos State.

The actress died on Friday, 30th July 2021. According to a statement issued by her family, Rachel Oniga, died from a heart-related issue she suffered from, for a short while and not Covid-19, as speculated.

The veteran actress, was born on 23rd May, 1957 in Ebutte Metta, Lagos, but hails from Eku, in Delta State. Her first movie was titled Onome and her first Yoruba movie was Owo Blow.

She featured in other Nigerian movies like Sango, a movie written by Wale Ogunyemi and Wale Adenuga’s television series, Super Story.

May her soul rest in peace, Amen.