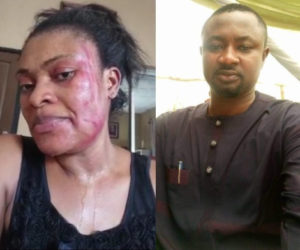 Ifeanyinwa Angbo, the wife of a Channels Television reporter, Pius Angbo posted a video on twitter crying to the public for help over alleged repeated assault by her husband.

Ifeanyinwa who is a medical doctor, lamented about how said she has been married to Mr Angbo for six years but has never enjoyed her marriage. She said that her husband, Mr Angbo, a correspondent of Channels Television assaults her over little arguments.

She said the recent assault was a result of her advice to her husband to stop spending lavishly on women and cater to his four children.

“Hello people, my name is Ifeanyi Angbo. I’m a doctor and I’ve been married to this man Pius Angbo of Channels Television for six years. And for six years, I’ve not known peace. It’s been from one woman to another. I just had a baby. It was a caesarean section just about 4 weeks ago.”

“Just because I told him to spend wisely and not spend on women so recklessly, considering that we have four children and these children would have to be trained, that’s why I got this beating.”

This is Dr Ifeanyinwa Angbo. She’s a medical doctor in Owerri. Her husband is Mr Pius Angbo of ChannelsTV.

She says he just beat her black and blue for telling him not to spend money on women. She just had a baby 4weeks ago and he has beaten her up.

This video may make you cry. pic.twitter.com/gL40Lt8lkc

According to reports, Mr Angbo is yet to respond, however, Channels TV has said in a tweet that they will look into the allegation and appropriate action will be taken.

Channels Television does not condone violence against women or anyone in general.
The domestic violence matter reported against one of our reporters is being investigated and appropriate action will be taken.

The case has also gotten a few reactions on social media (Twitter), especially from Nigerian singer Simi. View her tweets below:

Alleged human beings responding to a woman (possibly risking her life) calling out horrible physical abuse from her husband saying "I want to hear both sides of the story". What is wrong with you???