EndSARS: “We Never Win Anything” – Davido Tells Protesters In Abuja After IGP Announced Disbandment Of SARS 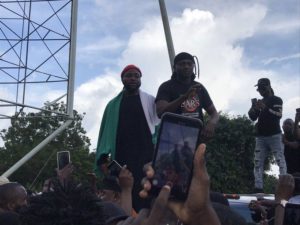 Nigerian singer, songwriter and music executive David Adeleke popularly known as Davido has said that Nigerians have not won anything although the Inspector General of Police (IGP) declared the disbandment of the Special Anti-Robbery Squad on Sunday, following massive protest by Nigerians.

Davido said while leading a group of protesters in to the police headquarters in Abuja after there were attacked by the police with water cannons, teargas and ammunitions.

we want an Executive order, a Legislative action & a Judicial panel of enquiry set up to prosecute those rogues. Nothing more, nothing less!!

We want the innocent protesters released now!” he wrote.

EndSARS: Five Things To Know About The ...