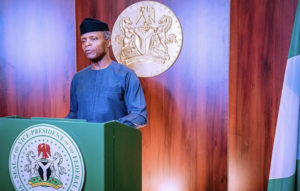 Nigeria’s Vice President Yemi Osinbajo, has condemned the operations of the Federal Special Anti-Robbery Squad (FSARS) officials in recent times as they have been attacking young men in Lagos and beyond the state.

Yemi OsinbajoF said he fees concerned and sometimes angry that SARS Operatives arrest and kill young men and described actions as unacceptable, and illegal and assured that the allegations will be well investigated and culpable will face prosecution duly.

In a video which captured him speaking to the media, he lauded the Inspector General of Police, Mohammed Adamu for placing a bam on the routine patrol by SARS officials and other Tactical Squads of the Nigeria Police Force.

The harassment of young Nigerians by some police officers is completely unacceptable, unlawful and illegal. The government and the police must, and will, ensure that every one of those allegations is properly investigated and those found responsible, prosecuted.