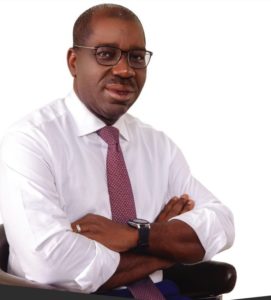 Governor Godwin Obaseki, the candidate of the Peoples Democratic Party, has scored the highest votes in Saturday’s Edo State governorship election and has been declared the winner.

The result of the election, held in all Edo’s 18 local governments, was declared by the Independent National Electoral Commission (INEC) on Sunday in Benin, the state capital.

“Godwin Obaseki of the PDP, having satisfied  the requirement of the law and scored the highest number of votes, is hereby declared the winner,” Johnson Alalibo, the chief returning officer of the Independent National Electoral Commission (INEC) in the state, announced on Sunday afternoon.

Mr Obaseki polled 307,955 votes to defeat his main rival, Osagie Ize-Iyamu of the All Progressives Congress (APC), who had 223,619 votes. He also won in 13 of the 18 local government areas and thus scored more than 25 per cent of votes cast in two-thirds of the local governments in the state to satisfy the second constitutional requirement to be declared governor.