Former National Chairman of the All Progressives Congress (APC), Comrade Adams Oshiomhole has survived a fatal convoy accident, which claimed the lives of two policemen attached to the convoy. 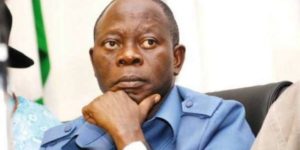 The accident happened when Oshiomhole was reportedly on his way to Ovia Local Government for a political campaign by 12 noon at Benin-Lagos bypass. However, Oshiomhole’s media aide, Victor Oshioke has alleged that the accident was an assassination attempt.

Describing the details of the accident, he said, “The convoy was heading for Usen, where Comrade Oshiomhole was expected to appear at a campaign rally, along with Pastor Ize-Iyamu, when a trailer driving in the same direction veered off its course, hit the back-up Toyota Hilux carrying seven policemen, forcing it off the road into the bush and rammed into the Sport Utility Vehicle (SUV) carrying Comrade Oshiomhole, causing substantial damage.

“Comrade Oshiomhole and other persons in the convoy, apart from those indicated above, did not sustain any injury. It is pertinent to state, without fear of contradiction, that the convoy of Comrade Oshiomhole was maintaining legal speed limit when the incident occurred.

‘’This explains why the trailer, travelling in the same direction overran the Toyota Hilux vehicle off the road and still hit the SUV carrying Comrade Oshiomhole, causing substantial damage. Without prejudice to police investigations, eyewitnesses account of the incident suggest, and we believe rightly too, that this was an assassination attempt targeting Comrade Oshiomhole.”

Federal Government Assures CAN That CAMA Is ...