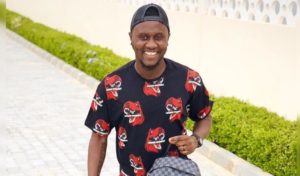 Former Nigeria junior international, John Felagha is Dead. Felagha a member of the 2009 Golden Eaglets class passed away in Saly, Senegal on Sunday, while awaiting return to Nigeria on holidays.

The 26-year old Felagha who was also a member of the Flying Eagles is described as an amiable person.

He was among the first set of Nigerians selected for the Aspire Football Dreams Project and after five years at the Academy where he excelled, he played professional football at KAS Eupen in the Belgium Jupiter League.

He was the second choice goalkeeper of the Golden Eaglets at the 2009 FIFA U 17 World Cup hosted by Nigeria, where the team lost to Switzerland in the final at Abuja.

Felagha was also in the Flying Eagles team at the Africa Youth Championship and the FIFA U 20 World Cup two years later.

Until his death, he was a goalkeeper coach at the Aspire Football Academy. He is survived by sisters and uncles. 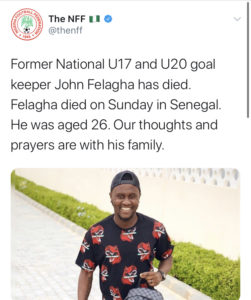