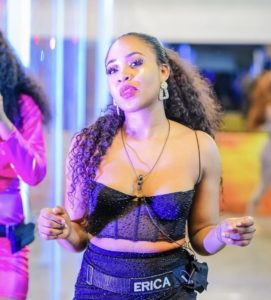 Erica has been named as the new head of house for week 7 after a beautiful performance in the weekly HOH challenge.

Following the rules guarding the use of the head of house lounge, she had to choose a housemate of the opposite sex as her deputy which she did by choosing Prince.

Erica and Prince also nominated Dorathy and Triky Tee as their guest for the week.

All four of them get to enjoy all facilities provided except the guest who cannot pass the night with the HOH and her deputy, and also don’t get immunity.

Dorathy Hits Half A Million Followers On ...