Nigerian activitst and realtor, Segun Awosanya popularly known as Segalink has taken to his social media pages to mark his 12th year wedding anniversary with his wife, Odezi Awosanya. 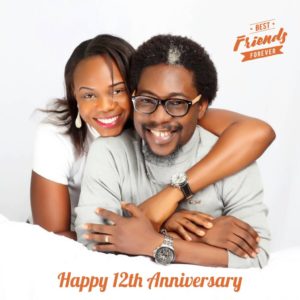 Posting a lovely picture of himself and his wife on his Twitter page, Segalink described marriage as a relationship in which one is always right, and the other already needs more whiskey. He went further to write, “Sadly, I don’t drink anything but the auction of the Holy Ghost (The Most High).”

Talking about his 12-year marriage, he wrote, “It’s been a wonderful journey that feels like yesterday, one that cost me my Bachelors degree and confers upon you an inalienable Masters degree.”

He also professed his love to his wife with sweet words, thus “Love you now, always and forever. Here is to the best decision we have ever made darling…Happy 12th Anniversary! ?”

Marriage as described by notable scholars and social adventurers is a relationship in which one person is always right, and the other always needs more whiskey…sadly I don’t drink anything but the auction of the Holy Ghost (The Most High). pic.twitter.com/QGEUohJ2ru