The Governor of Benue State, Samuel Ortom has asked the Federal Government to allow responsible citizens of Nigeria carry sophisticated weapons. According to him, this would solve the problem of insecurity in the country to a large extent by deterring criminals from attacking innocent Nigerians. He also mentioned that the policy should be further backed with a guideline that prevents illegal possession of firearms without exception. 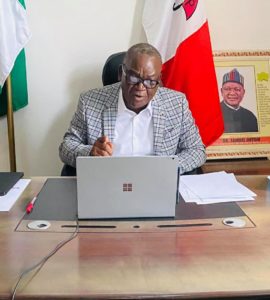 These recommendations of his were contained in the paper titled ‘Insecurity and Governance Challenges in the New Normal’ the Governor presented at the virtual meeting convened by Centre for Values in Leadership, CVL in collaboration with the Nigeria Governors Forum (NGF).

The governor acknowledged that insecurity still remains a real threat to the development of the country. He therefore recommended that security agencies should be funded and security personnel should be trained constantly on the global dynamics in the fight against insecurity. He also said that the citizenry should be trained and given the needed enlightenment and orientation to shun negative acts and become more patriotic.

The governor also reiterated that the National Drug Law Enforcement Agency has a role to play in successfully confronting drug barons and drug peddlers and in stopping the circulation of illegal drugs in the country. He concluded by saying that the Government should create more jobs for youths and remove all embargoes on employment in Nigeria.