An Air India Flight Express flight crashed at about 7.40pm on Friday, 7th August, 2020 while it was attempting to land amid heavy rainfall.

The plane, which had about 190 people on board, was a repatriation flight arranged by the Indian government to evacuate its citizens from Dubai in the middle of the Coronavirus pandemic. 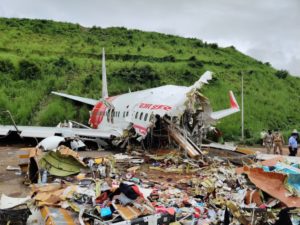 According to the Indian Express, the flight skidded off the runway and split into two while landing at Kerala’s Kozhikode airport in the middle of a heavy rainfall. 17 persons have been confirmed dead, including two pilots. According to the health minister, those injured have been rushed off to the hospita with some in critical conditions.

One of the former Indian Air Force pilots who lost his life in the fatal incident, Wg. Cdr (Retd) Sathe, was an accomplished fighter pilot and also won a Sword of Honour at AFA.

Frodd Gets A Car Gift From One ...