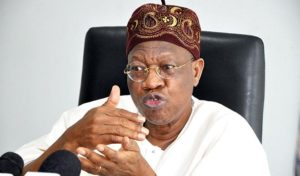 The minister for Information and Culture,  Lai Mohammed has debunked claims of his involvement in the allegation from the ministry concerning the closure of the BBnaija Season 5 over Covid- 19 fears.

Lai Mohammed was reported to have asked the broadcasters to suspend the activities of the BBnaija Season 5 for flouting safety protocols to combat the spread of the infection.

MultiChoice Ltd, the show producers interacted with the NBS and made them to understand that they sought for the green light from the Lagos state government  in line with the Covid 19 protocols to ensure a conducive and safe show before they commenced.

But, the minister, in a statement by his media aide debunked the media claim saying the ‘report was not credited to the minister’.

“There’s going to be a memo to that effect that he will send; anybody that is sure that the minister made that statement should provide a memo.

“Like I said earlier, we will not dignify speculative report; if you tune your satellite TV to channel 198, I am sure Big Brother Naija is still airing, contrary to the speculative report that the minister has ordered NBC to suspend the show.”