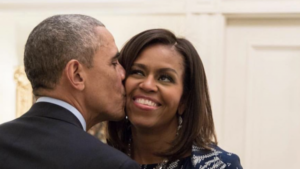 Michelle Obama is set to launch her new podcast this Wednesday, 29th July, 2020 on Spotify. She announced this today in the introduction of her first episode, thus: “For eight years my life was full of crazy schedules, juggling big initiatives, speeches, state dinners. Not to mention trying to raise two daughters and keeping my head above water. But once Barack’s second term ended, the presidency was over and finally had some time to breathe.

“I don’t want this podcast to be prescriptive … or present anyone’s ideas as truth. I just want it to feel like we’re sitting together on a park bench or in the booth of a restaurant with the jukebox playing. And most importantly, I hope this podcast sparks ideas and topics that all you listeners can open up with in your own circles.”

Barack Obama, former president of the United States of America, will be the first guest on “The Michelle Obama Podcast” which will debut on Wednesday, 29th July, 2020 on Spotify.