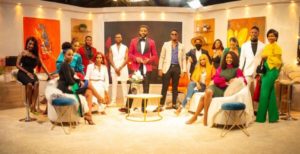 It’s been an exciting past few weeks filled with drama, emotional conversations and forgiveness, and now BBNaija Pepper Dem Reunion has officially come to a close.

For seven weeks, we got to see housemates of Season 4 again and relive some interesting and emotional moments from their time in the house.

In case you missed the final episode of the reunion show, below is everything that went down:

The Housemates wore their hearts on their sleeves

This final week, the focus was feelings and emotions. A WHO mental health advocate, Dr Ogunseun Ogunnubi was around to chat with the housemates about how they felt while they were in the house and what they were feeling when certain events occurred. The

housemates laid it all bare and got to let go of a lot of their old burdens.

Venita is not a spy after all

Omashola and Venita finally cleared the air on the whole team loyalty issue. Omashola was initially upset with Venita because he thought she was a spy for Team Enigma where most of her former teammates from Cruisetopia were. Venita corrected Omashola’s wrong misconception and said she didn’t spy for either team neither did she give out any information on each team to the other.

Diane and Tuoyo settle past beef

Diane and Tuoyo didn’t seem so friendly outside the house despite all the chemistry they exhibited inside the house. Diane said she didn’t hate Tuoyo but sometimes chemistry with people just fades away after some time. Tuoyo, on the other hand, said his issue with Diane was how quickly she moved on from him to Elo when he left the house. Guess we shouldn’t be expecting anything from that ship.

Tacha’s game plan and the birth of the Titans

The doctor let it slip that he’d been following Tacha even before she entered the house. He said he was worried her game plan of ‘myself and God’ wasn’t healthy for her friendships in and out of the house, and that it seemed that was what birthed the titans. Tacha explained why she seemed that way in the house saying that she didn’t want emotions to distract her from playing the game. She said she is on good terms with everyone outside the house.

The Pros and Cons of Social Media Validation

One of the things discussed this week was the pressures of being active on social media. Ella talked about the pressures of being forced to be active on social media just to maintain the sense of being ‘valid’ and how it made her question herself a lot. The mental health expert said that while validation was a good thing as it helped to grow influence and connections, it was important not forsake one’s values.

Though we will miss the former housemates, all the drama and fun they brought will never be forgotten.

Season 5 of the BBNaija show will be premiering this Sunday, July 19 and we can be sure that it will be more drama and more fun with the new set of housemates. You can catch the premiere at 7:00 PM on DStv channel 198 and GOtv Max and Jolli packages on channel 29.

Do not miss out on all the drama! Sign up on DStv today via www.dstvafrica.com or get GOtv Max or Jolli on www.gotvafrica.com, and download the MyDStv and MyGOtv apps from the app store for more self-service options.

To find out more about this and other information on the fifth season, visit www.africamagic.tv/bigbrother. You can also follow the official Big Brother Naija social media pages for news and updates with the hashtag #BBNaija on Twitter @bbnaija, Instagram @bigbronaija and Facebookwww.facebook.com/bigbrothernaija as well as all verified social media pages of DStv Nigeria, GOtv Nigeria and Africa Magic.