The Public Theater and WNYC’s Radio Production of Richard II, Directed by Saheem Ali, Kicks Off 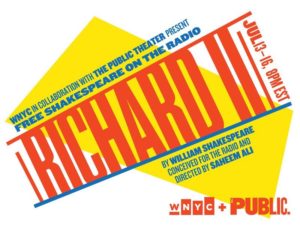 Shakespeare’s works can never be forgotten – this is the reason why Saheem Ali and his crew are re-making ‘Richard II’ into a public theater and radio production via a four-night broadcast starting from Monday, 13th July, 2020.

The play will be broadcast for over four nights, every 8.pm E.T. as it streams at WNYC.org. Also, the play will be airing on WNYC 93.9FM and AM 820 for local NYC. Furthermore, according to Playbill, the series will be made available via a podcast download for on-demand listening after its airing.

Hushpuppi’s Lawyer Says He was ‘Kidnapped’ by ...