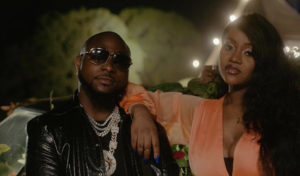 Davido’s fiancée Chioma has reacted to the alleged domestic violence rumors in the relationship.

The two lovers have been in the news in the past few days and mostly it is for the wrong reasons as allegations about Davido’s infidelity took center stage within most social media groups.

You would recall how an uproar was caused on social media after reports of Davido’s fourth baby mama, Larissa, a UK-based Makeup artiste popped up with another one in the US.

Rumors went round that Chioma had a confrontation with Davido which led to to Davido’s broken ankle.

Reacting to all these scandals surrounding their relationship, Chioma took to her Instagram page to debunk such claims as she stated in her caption;

“Never has there ever been an incident of abuse in my home. He has never in his life lifted a finger to touch me and I have never so much as even pushed him”