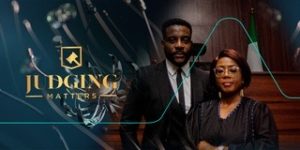 Judging Matters continue to deal with real-life issues using the arbitration system, and minor cases of real people getting justice from a small claims court. Judging Matters is presided over by Justice Olusola Williams (Rtd.) and celebrity host, Ebuka Obi-Uchendu serving as the counsel on the show. Let’s get to see what happened on episode 7 of Judging Matters, does this episode have to do with money and verbal agreement again? Coooooooourt ! ! !

Cyril Chukwelu is suing Chinoye Ndukwe for failing to pay him the sum of N80,000. Cyril is a thrift collector, and on March 5th, 2019 Chinoye requested for a loan of N75,000 to pay back in 6 months, with N20,000 as interest on the entire sum. Both had a verbal agreement for Chinoye to pay the sum of N15,000 in instalment for 6 months. On June 18th, she paid the 1st instalment and subsequently, she started giving excuses to Cyril. Both had been doing the thrift business for about 2 years.

In her reaction, Chinoye submitted that a container had blocked her shop in Ajegunle and she had not been able to do business like before. She told the court that Cyril keeps pestering her, calling her at odd hours of the night, and her husband has now begun wondering if there is more to the calls than the money issues. Counsel Ebuka asked Chinoye if she had not made any money since June last year and in her response she said “it is not like I have not made any money, but I have to feed my family.” This response did not go down well with Justice Olusola Williams who further asked Chinoye that if truly her children were hungry, won’t she have found a more industrious way to make money and also payback, and perhaps if her husband feels so disturbed by the incessant calls, he should have given her the money to offset the loan.

She thereafter declared judgement for the claimant in the sum of N80,000.

August 26th, 2019, Eke Lilian had approached Ejike, a carpenter in her neighbourhood to build a wooden shop for her hairdressing business. She paid N36,000 for a space  and N7,000 for ‘Omo oni le’ (landowner fee). Mr Ejike requested for N54,000 to construct the space, after which Eke showed him an exact picture of what she wanted. Though Ejike had not done any work for Eke before their first meeting, he assured her the wooden shop would be completed in 7 days. Lo, and behold, 7 days went by and Ejike was nowhere to be found, the shop project had not been done, and Eke’s rent was counting already.

Ejike began to give excuses, 3 months passed, Eke travelled in November and came back in January, February he had still not done the work. Now Eke is asking for a refund of her N97,000 from Ejike because time has been wasted and she has not been able to make sales. On Ejike’s return, he had started to build the makeshift shop, but Eke was highly disappointed that what was built did not in any way look like the sample picture she gave to him.

Counsel Ebuka Obi-Uchendu thereafter cross-examined Ejike who told the court that the same week he got the N54,000 from Eke, his father took ill and he was called to the village, so he went with the money he received from Eke. He said he did not have any other money on him, and because he didn’t want to be insulted by the family who had high expectations of him coming from Lagos where he worked, he decided to use the money to offset his father’s medical bills. Justice Olusola Williams described Ejike’s actions as lacking integrity, unfair and callous. He didn’t even consider that Eke had rented the space for a year and she also has a family to take care of.

In her ruling, she declared judgement for the claimant in the sum of N75,000.

Don’t miss the next episode of Judging Matters on Mondays on Africa Magic Showcase channel 151 at 6:00 PM, with a repeat episode on the same channel on Wednesdays at 10:00 PM. Stay tuned to Africa Magic for the finest entertainment the continent has to offer and if you aren’t already watching, make sure you get your DStv subscription asap!