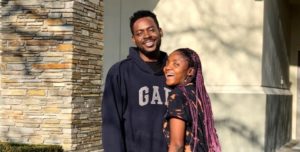 Adekunle Gold shares his feelings as he welcomes his first daughter, Adejare in a social media post. He shares how he cried so much at the birth of his baby and how he cried when he carried her in his arms.

It is really a wonderful moment for a father to hold his daughter in his arms. Adekunle Gold also shared how obsessive his love for his daughter has grown, and how he welcomes both the struggles and happy moments of parenthood with great joy.

Adekunle also addresses the need to raise children differently in the 21st century as he said, “We must ensure we don’t raise our children with the same consciousness that raised us. We must raise sons who respect value and revere women and raise daughters that are strong and fearless. That we raise children who speak up and stand up for what is right, that we raise children who don’t continue the cycle of abuse, fear, secrecy and insensitivity that has plagued our own generation and the ones before us”. See the social media posts below: