What you need to know about the Black Out Tuesday hashtag 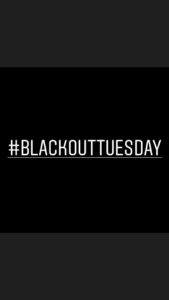 A blank black image has gone viral today, 2nd June 2020, following the fight for justice going on in the world, on the murder of a Black Man, George Floyd by policeman Derek Chauvin, in the US, the death of Vera Omozuwa, who was raped and murdered in a church and the death of 16-year-old Tina Ezekwe was shot and killed by a policeman at a bus stop near her home.

Spread awareness and have people change their caption.