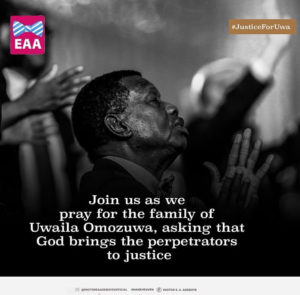 Pastor Enoch Adeboye, General Overseer of the Redeemed Christian Church of God, has reacted to the rape and murder of a University of Benin student, Vera Uwaila Omozuwa, in one of the branches of his church

Omozuwa’s attackers reportedly smashed her head with a fire extinguisher and left her unconscious around the Ikpoba Hill area of Benin City, the state capital, about four days ago.

Despite being rushed to the intensive care unit of a hospital, Omozuwa couldn’t make it as she succumbed to the injuries sustained during the savage attack.

Friends and all those who knew her closely have been paying tribute and calling for the perpetrators of the crime to be brought to justice.

Adeboye, in a terse statement on his official Instagram page, condemned the tragedy.

JUSTICE FOR UWA AND TINA