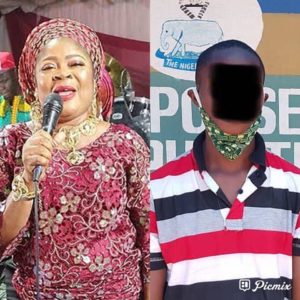 The operatives of Rapid Response Squad (RRS) has arrested a 19-year-old National Diploma holder of Yaba College of Technology, Lagos as the brain behind the blackmail of Queen Salawa Abeni with half- nude photographs.

The suspect, Olufowoke Oladunjoye Emmanuel, a resident of Brentfield Avenue, Peace Estate, Magboro, Ogun State, was picked up by the Decoy Team of Rapid Response Squad last week Thursday after three days of trailing him.

The Commissioner of Police, Mr. Hakeem Odumosu had in the wake of the attempt by an unknown individual to blackmail Alhaja Salawa Abeni sometime in April 2020, directed the Commander, Rapid Response Squad, DCP Olatunji Disu to fish out the suspect.

The suspect in his statement to the police confessed to having been the mastermind behind the ploy to publish some nude pictures of Waka Queen in exchange for money, adding that he was alone in the scheme.

The suspect, a 2017/2018 Electrical Engineering student of Yabatech, disclosed that he saw the nude pictures in a memory card which he picked up on the floor in Yabatech sometime in November 2019.

He added that after downloading the nude photographs of Salawa Abeni on his phone, he picked up her mobile number from her Instagram page.

Our Decoy team have arrested a man who tried blackmailing the popular fuji artiste, Salawa Abeni with her nude photos. He claims he got them from a memory card which he found on the floor while in school. He has been transfered to State CID, Panti for further investigation. pic.twitter.com/R2XnO8WI5t

Genevieve Nnaji Reacts To The Death Of ...