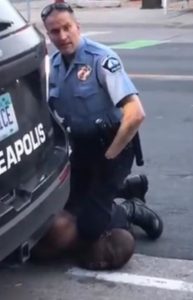 The Police officer who knelt on George Floyd neck, leading to his untimely death has been arrested, and has been charged with 3rd degree murder, according to Minnesota authorities.

Chauvin is the white officer who was seen on video kneeling on the neck of Floyd, a handcuffed black man.

The arrest comes after three days of protests, which escalated in violence as demonstrators torched a police precinct that had been abandoned by officers.

Davido shows off the interiors of his ...