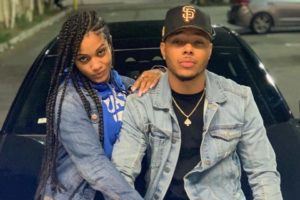 Gregory Tyree Boyce, who appeared in the first Twilight film in 2008, has been found dead alongside his girlfriend in Las Vegas.

Boyce was 30 and his girlfriend, Natalie Adepoju, was 27.

Police said it was not a criminal incident, and the coroner said they were waiting for toxicology results.

Boyce, 30, played Tyler in Twilight, the character who almost crashed his van into Bella before Edward stopped it with his bare hands.