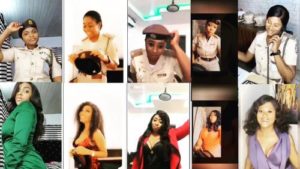 The Nigeria Immigration Service has suspended the disciplinary redeployment of five female officers punished for participating in a viral social media video challenge in their uniforms.

The women, Priscilla Irabor, Catherine J. Bakura, Blessing Alfred Udida, Binti I. Attabor and Ockiya Eneni, had recorded themselves transforming from their uniforms to a wide range of outfits while participating in the challenge initiated by popular Nigerian musician, Falz.

Early in April, the NIS in a disciplinary memo, asked the women to explain why they should not be punished for violating the internal code of the agency.

The agency as a way of punishment to the ladies, transferred them to different states across the country.

But in a series of tweets on Friday, the NIS said the Comptroller General of the agency, Muhammad Babandede, had decided to suspend the deployment after his attention was drawn to the matter.

PUBLIC NOTICE
The attention of the Comptroller General Muhammad Babandede MFR has been drawn to some trending matters on some social media platforms regarding the deployment of some of our Personnel to some Formations across the country.
2. It is important to note that staff

TOO MUCH SALT IS BAD FOR YOU