Being a celebrity or a Twitter influencer does not mean overstepping boundaries that are clearly said to be OUT OF BOUNDS.

This is the crux of Anji’s cry for justice against Damola as she accused him via Twitter of raping her and two other ladies. Anji, in the accusation tweet, said she had tried to live with Damola’s apology but she decided to voice out when he also abused @justduns and @elharsh. Here is a screenshot of her tweet: 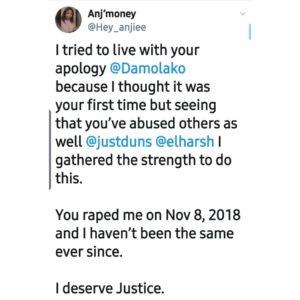 She also attached a screenshot of Damola’s apology to her after the rape incidence which can be found below: 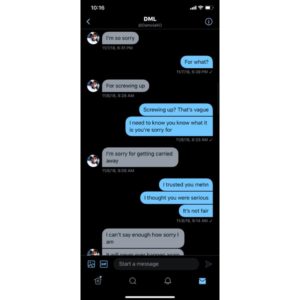 Kiki Mordi, a renowned feminist also said in a tweet: “We must never forget publications like Native Mag and Zikoko that document rape culture in spaces those agbaya publications can’t. Some jobless journalists that twisted my comments out of context and published that I hate men on a NATIONAL DAILIES, have been quiet since”.

The Stand To End Rape Initiative also tweeted “Hello @Hey_anjiee, @justduns, & @elharsh. We are sorry to hear about this sore experience, but we are glad you found the courage to speak up. We are committed to working with you to get justice. Please contact us via [email protected] so we can take the appropriate steps. https://t.co/xeAWTREkM9”

On Damola’s part, he has remained silent; however, the attention of the public has been drawn to an old tweet on his timeline which reads “I’m a therapist (the rapist)”. There are insinuations from Damola’s old tweet that he already confessed to the offence of rape long before the accusation. However, these insinuations are yet to be founded.

Also, Imisi also known as Gbagaun Detector, has also been accused of rape. However, he came to his Twitter handle to explain his own side of the story by saying that the first accusation wasn’t rape and that it was mutual between both parties. He also stated that he stopped harassing the second lady immediately she showed signs of distress. You can find screenshots of his explanation on Twitter below:

Yusuf Abubakar Tumi came to his Twitter page to share his thoughts on the thin line between blackmail and mob justice and also shared his experience of how Uloma and one other lady accused him of rape. Screenshots of his tweet are attached below:

Bollylomo was also accused in a tweet of which its screenshot has been attached below:

However, Bollylomo had replied in a tweet saying that he was falsely accused and tha legal measures will be taken against his false accusers. The screenshot of his tweet is hereby attached below:

These allegations have not been proven yet; however, we are on the lookout for the exact true position of things.

THE PLACE OF INTERNATIONAL RELATIONS IN FIGHTING ...