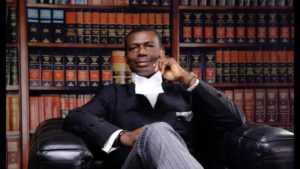 Human rights lawyer, Mr Ebun-Olu Adegboruwa (SAN), has urged the Lagos State Governor, Babajide Sanwo-Olu, to offer state pardon to popular actress, Funke Akindele, aka Jenifa, her husband, Abdul Rasheed Bello, and street joggers who were arraigned for violating the social distancing directive of the government to curb the spread of coronavirus.

The lawyer urged the governor to take a cue from the Federal Government, which on Thursday, granted amnesty to 2,600 prison inmates.

Akindele and her husband were convicted on Monday of violating the Lagos State social distancing order by holding a crowded birthday party in their house on April 5.

The Lagos State Magistrate’s Court in Ogba sentenced them to 14 days of community service, in addition to a fine of N100,000 each and an order that the state should keep them in isolation for 14 days.

Also on Wednesday, the court convicted 78 residents for gathering on the Gbagada-Oworonshoki Expressway for physical fitness exercise amid the Federal Government’s 14-day lockdown of Lagos State.

They were sentenced to 14-day community service and 14-day quarantine at the Infectious Disease Hospital at Yaba.

But appealing for amnesty on their behalf on Thursday, Adegboruwa said, “Since the Federal Government is granting amnesty to 2,600 prisoners, the Governor of Lagos State should emulate this good gesture and show fatherly love to the Akindeles. This should also be extended to all those arrested for jogging on the streets, as they could not have all set out deliberately to disobey the COVID-19 regulation.

“Since we are facing a novel situation at hand, government should show some magnanimity to its citizens, as it is being done all over the world.

“Nigerians have never been locked down for this long without food and money and it is not proper to add to their woes with arrest and prosecution.”

The lawyer, however, commended Lagos State’s handling of the pandemic and appealed to citizens to support government in the fight against the disease.