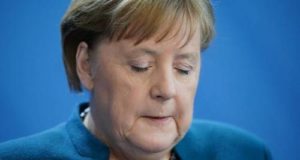 German Chancellor, Angela Merkel, is currently quarantined after a doctor, who administered a vaccine on her, tested positive for Coronavirus, according to NY Daily News.

Merkel’s spokesperson, Steffen Seibert, said the 65-year-old was informed about the doctor’s test shortly after holding a news conference on Sunday to announce new measures to curb the spread of the virus, including banning gatherings of more than two people.

Merkel will undergo “regular tests” and work from home for the upcoming days, Seibert said.