Journalists from various news outlets who accompanied the First Lady during her visit to the Oye local government have recounted their close encounter with death during the violent protest which involved the students of the Federal University, Oye Ekiti.

Some of the journalists who told their story include; Folorunso Adebiyi of Federal Radio Corporation of Nigeria, Olasunkami Ogunmuko of CORE TV, Raphael Ogbonnaiye of Daily Trust, Ayodele Afolabi of The Guardian , Adedayo Oladele of New Nigerian, and many others.

According to account of one of the journalists; Sunkanmi Ogunmuko. a journalist with Core Television station, he said Erelu Fayemi was already conducting the empowerment programme at the civic centre in Oye Ekiti when the incident occurred. 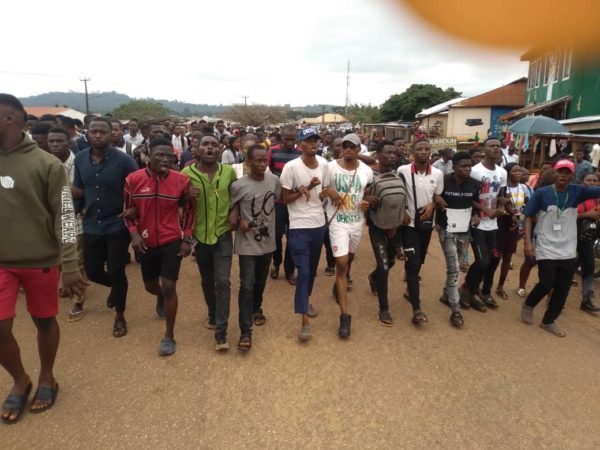 He also mentioned that the students came in their hundreds from both Oye and Ikole campuses and started destroying vehicles with sticks and other dangerous weapons.

He said; “They destroyed over twenty vehicles parked outside the hall and wounded journalists and other participants who were mainly women.

“It was the security details around the First lady that alerted the entourage about the happening. They were the ones who summoned courage to remove all the bonfires and mounted road blockades before the first lady and some of the women were frisked out of the beleaguered scene.

“Most of the journalists were injured as the students, aided by some hoodlums, threw stones, sticks and bottles at them, while vehicles conveying journalists and police vehicles were also attacked as they drove out of the town “.

He added that in the process, one journalist with the FRCN was hit on the head, while others sustained injuries, but were later treated at a private hospital in Ado Ekiti.

He admitted that the students might have been inflitrated by wild – looking thugs during the protest.

Meanwhile, the state council of NUJ has demanded a full scale probe of the incident with a view to bringing the perpetrators to book.