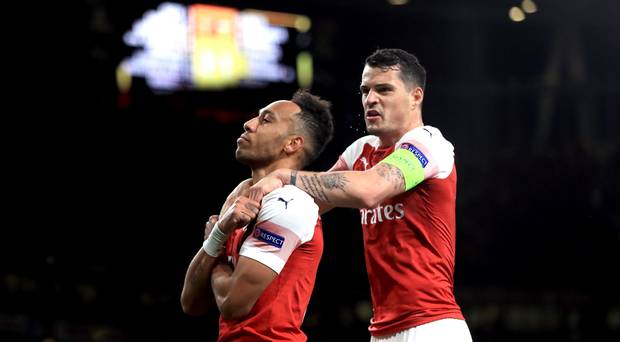 Arsenal came from behind to beat Valancia, 3-1 at the Emirates in the first leg of their Europa league semi-final, thanks to two goals from Lacazette and a late strike from Aubameyang.

Emery’s men went in the match on the back of three straight defeats in the league, which put their top-four hopes in jeopardy, making the Europa league the sure bet for a Champions League place next season.

Arsebal team started shakily – as if the ghosts of the last three matches were still lingering in their minds.

They were punished for it when Mouctar Diakhaby rose highest to nod the visitors into the lead, as the Emirates went mute.

Lacazette released Aubameyang with a through ball, and the Gabonese cut inside as he raced through on goal, and squared the ball for Lacazette who scored into an empty net.

Arsenal took the lead moments after when Lacazette nodded Xhaka’s pin-point cross past the Valencia goalkeeper.

After the break, the Gunner looked for a third and should have added to their tally, but Lacazette who had been the hero spurned two glorious chances. Valencia also had chances of their own, but failed ton test Cech in the Arsenal goal.

It was Arsenal who had the last say though as Aubameyang scored Arsenals late in the game after a superb cross from Kolasinac to the far post.

In the other game, Chelsea were held to a 1-1 draw against Frankfurt in Germany.

Both second legs will be played next Thursday, May 9.