Emmerson Mnangagwa Sworn In As President Of Zimbabwe

Emmerson Mnangagwa has been sworn in as the President of Zimbabwe in front of a packed stadium. 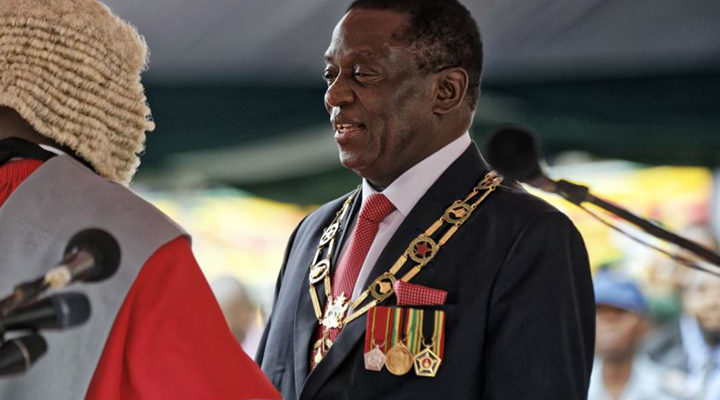 Emmerson Mnangagwa, right, is sworn in as President at the presidential inauguration ceremony in the capital Harare, Zimbabwe Friday, Nov. 24, 2017. Mnangagwa is being sworn in as Zimbabwe’s president after Robert Mugabe resigned on Tuesday, ending his 37-year rule. (AP Photo/Ben Curtis)

Thousands of attended the inauguration, coming from outside the capital, and joined by foreign leaders at the capital’s national stadium.

He took the oath before the country’s chief justice, Luke Malaba. Mulaba was amongst the 9 court judges that dismissed Chamisa’s petition after the election was marred by crackdown on opposition figures and supporters which resulted in 6 deaths.

Mnangagwa will have his work cut out to revive the Zimbabwean economy after the ruin left behind by Mugabe who was removed in a coup in November, 2017.

Mnangagwa will have to convince the US. to ease financial sanctions on the ruling party, Zanu-PF, including Mnangagwa himself.