Kofi Annan who was the first black African to hold the position of UN secretary-general, has passed on at the age of 80 in Switzerland. According to his aides, he passed away on Saturday following a short illness. 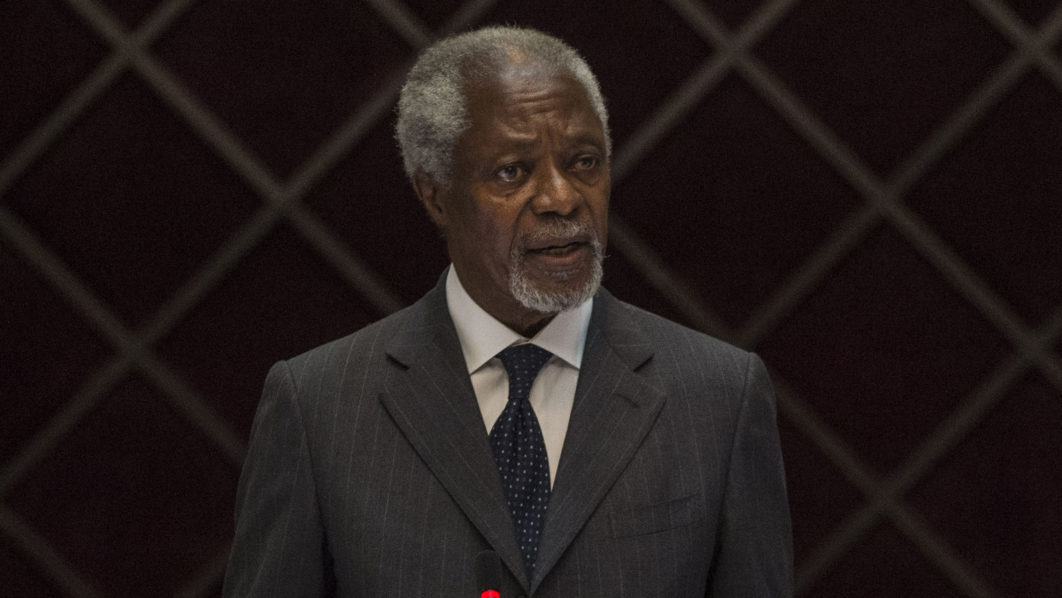 (FILES) In this file photo taken on September 5, 2016 Former UN secretary general Kofi Annan (L) delivers his address while Myanmar State Counsellor and Foreign Minister Aung San Suu Kyi (R) listens during their meeting at the National Reconciliation and Peace Centre in Yangon with the multi sector advisory body to find lasting solution to Myanmar’s stateless Rohingya Muslims.
Former United Nations Secretary General and Nobel Peace Prize laureate Kofi Annan has died on August 18, 2018 after a short illness at the age of 80, his foundation announced. “It is with immense sadness that the Annan family and the Kofi Annan Foundation announce that Kofi Annan, former Secretary General of the United Nations and Nobel Peace Laureate, passed away peacefully on Saturday 18th August after a short illness,” the foundation said in a statement. / AFP PHOTO / ROMEO GACAD

In a statement announcing his passing away, the Kofi Annan Foundation described him as a “global statesman and deeply committed internationalist who fought throughout his life for a fairer and more peaceful world”.
“Wherever there was suffering or need, he reached out and touched many people with his deep compassion and empathy. He selflessly placed others first, radiating genuine kindness, warmth and brilliance in all he did.”

Mr Annan who hails from Ghana, died in hospital in the Swiss city of Bern. He had been living near Geneva for several years before his death.

During his lifetime, Mr Annan served two terms as UN chief from 1997 to 2006, and was later awarded a Nobel Peace Prize for humanitarian work for his efforts. He later served as the UN special envoy for Syria, leading efforts to find a peaceful solution to the conflict.

In 2001, Mr Annan was awarded the Nobel Peace Prize for helping to revitalise the international body, during a period that coincided with the Iraq War and the HIV/Aids pandemic.

Kofi Annan was not immune from criticism. His critics blamed him for the UN’s failure to halt the genocide in Rwanda in the 1990s when he was head of the organisation’s peacekeeping operations. Following the US-led invasion of Iraq, he and his son were accused of being involved in the “oil for food corruption scandal” that led some to call for his resignation, though he was later exonerated.

His death has received tributes from world leaders and diplomats including UN high commissioner for human rights Zeid Raad Al Hussein, prime minister Theresa May, amongst others. Current UN chief Antonio Guterres also paid his tribute to his predecessor, describing Mr Annan as “a guiding force for good”.

Annan’s diplomatic career continued after retirement from the UN, with a successful role in negotiations for a power-sharing deal to end post-election violence in Kenya in 2008. His foundation was created later and it aims at promoting global sustainable development, security and peace.

In 2012 Mr Annan was made chair of The Elders – a peace and human rights advocacy group started by South Africa’s Nelson Mandela. His most recent role was chairing an independent commission investigation into Myanmar’s Rohingya crisis.

Kofi Annan is survived by his wife Nane and three children who were all by his death bed.

President Nana Akufo-Addo of Ghana has ordered flags to be flown at half-mast across the country and in diplomatic missions across the world for seven days, starting on Monday.