Nigerian singer, Banky W has denied the claims that he received money from the Buhari Administration after news surfaced online that he was paid to promote the hashtag #67MillionYouth.

The popular singer took to Twitter to refute the allegations

“The problem here is that we are now so suspicious and used to being taken advantage of that everything automatically means corruption and oppression. This initiative is 100% free of any GOVT influence and is just a cross section young people across the country actually trying to do good by forming a non-partisan effort to get the youth interested in voting and advancing the cause of young people in Nigeria. It is open to all young people regardless of tribe religion and political affiliation etc. It is a good thing. It has zero ties to any Government administration and CERTAINLY zero pay. It’s actually a labour of love. It’s sad that young people dedicate their time, energy to try and come together to move the country in the right direction, and instead of working together, or at least giving us a chance to bring about change and progress, some anonymous people would rather make up a completely false claim out of nowhere AND YOU GUYS RUSH TO BELIEVE THEM INSTANTLY. Over me. You see how critical I am of Government, you see how critical I am in trying to advance the cause of young Nigerians for years. Do you really think the Government is rushing to GIVE me money?  Me? Lol. I’ve never ever publicly supported any Presidential candidate. All I have ever done is try to be part of the progress that the young people seek. And you rush to believe some completely false “report” that some nincompoop created solely off the strength of their imagination. Sad. Almost makes me want to throw in the towel. When the very people I’m working so hard to speak to, speak for, and inspire to come be part of progress, are the ones making up false rumours and throwing stones at me. It’s just sad. Disappointing, frustrating and just plain sad.” 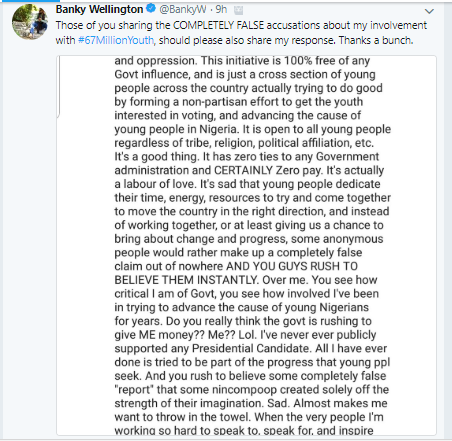 MEET THE CHEFS BEHIND THE CHEF RELIEF ...