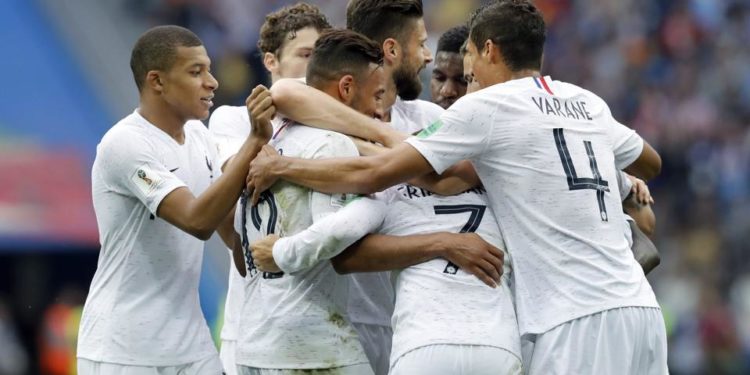 France became the first team to qualify for the semi-final of the World-cup after beating Uruguay 2-0.

A Varane‘s glancing header and a Muslera error from a Griezmann shot secured the French their first semi-final spot after losing to Italy in the 2006 final.

The game was tagged the immovable defence against an Mbappe led fast attack, and it played out like that for most of the first half.  The French probed and the Uruguayan resisted, until Varane broke the deadlock.

Uruguay, who went into the game with star striker Edison Cavani looked disjointed in attack throughout except for some moments after France took the lead. They almost stuck back immediately after the goal when Martin Caceres looked to have levelled matters, but Lloris pulled out a brilliant save to deny the South Americans.

Franace controlled possession for most of the second half without actually doing much with it until Muslera gifted them another goal that took the match beyond Uruguay.

There was no danger when Griezmann took possession of the ball just outside the box and left fly a shot that went straight at Muslera, who misjudged the ball and aided it into the net.

Uruguay tried to respond again, but they couldn’t muster much in and around the French box.

The game ended their run of four successive game and also their hopes of reaching the semi-final of the world-cup.