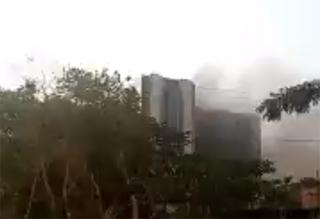 The peaceful environment surrounding the Headquarters of the Central Bank of Nigeria (CBN) was thrown into pandemonium when a diesel generator malfunctioned and caught fire some moments ago.

The fire was however put under control by CBN In-House fire fighters, the Julius Berger team and men of the Federal Capital Territory (FCT) Fire Service (FFS).

The fire was said to have started at about 6pm and lasted for about 30 minutes before it was put out. The huge smoke covered a section of the CBN building up to the roof and left the security guards and other staff on duty worried and confused.

He said, “The fire incident started at the generator house on the west side of the building and we were alerted.

“It was a minor fire incident and it had been put under control.”

In Love and Ashes, a true reflection ...