The meek housemate of Big Brother Naija, Debie-Rise has been crowned the new head of house (HoH) for a day.

Debbie emerged after she assumed the winner of the weekly task as instructed by Biggie’, the house owner. 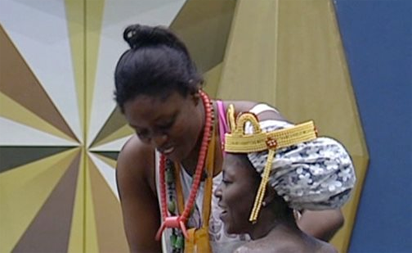 DebbieRise was crowned the HoH by Bisola, the incumbent head following a new rule by Biggie that the crown be passed among the housemates daily as the show comes to an end on this Sunday (April 9).

Debie-Rise who is a strong ally of fellow housemate Tboss is the first housemate chosen for this week.

So far, Bisola, ThinTallTony (twice in a row), Bassey and fake housemate Ese who have all been evicted have all served as HoH at one time or the others during the TV reality show.

However, the top five finalists competing for the grand prize of 25 million naira and a Kia Sorrento SUV comes down to Bisola, Tboss, DebbieRise, Marvis and Efe.